Pat Boone spent much of the ‘80s and ‘90s out of the secular media spotlight, but in 1997 he made a splash – charting at #125 on the Billboard Top 200 chart – with “In A Metal Mood: No More Mr. Nice Guy,” a tongue-in-cheek collection of Heavy Metal covers. Joining Boone on the record were some of the original artists like Ronnie James Dio and Alice Cooper.

Features Heavy Metal covers arranged in a Big Band style by the top arrangers in the business.

It was Dick Clark’s idea that Alice Cooper and Pat Boone present the award for “Hard Rock/Heavy Metal” at the 1997 American Music Awards. Much of the singer’s Christian contingent failed to get the joke.

What about a heavy metal album? (Excerpted from liner notes.)

Dave Siebels (Musical Director) and our band of youthful musicians and I were killing time between planes in England in 1987. One of the guys suggested again, “Hey Pat, why don’t we go in a studio and do some recording together?”

Dave said, “What about a heavy metal album?” And we all had a hearty laugh at the absurdity of the suggestion.

But Dave was serious…

Bruce Resnikoff of MCA called me and said, “If you’re serious about this metal project, we want it.”

Even before we were joined by Sheila E., Lenny Castro, and Dweezil Zappa, the other all-star jazz players felt they were in “hog heaven,” playing together on these fantastic charts, live-to-two tracks at Ocean Way Studios. That’s pretty much the way it went.

The buzz was out, and we were visited by Alice Cooper, Mick Fleetwood and Lindsey Buckingham, Billy Preston, Paula Kelly and others. Ronnie James Dio, upon hearing that we were doing his Holy Diver (on his birthday) also came by and joined in.

It was a party, a slammin, raucous and musically heavy spine tingling celebration.

Who knows? Maybe this unprecedented mix of milk and metal may win over a whole new audience for these very worthy songs. That’s my hope, so party hearty, dude.
– Pat Boone 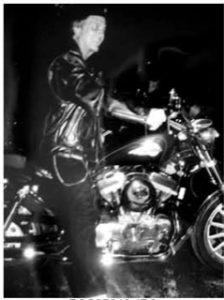